From A Wizard's Lizard Wiki
Jump to: navigation, search 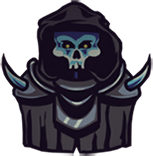 Death is the main antagonist of the game and the final boss.

His usual appearance is that of a great shadowy figure, with only a skull-like face visible from the opening in its cloak, wearing heavy armor and a black cape. Spikes protude from the shoulder pads and a thick darkness hide all of the body underneath, with only bony, humanoid limbs occasionaly poking out.

The angel of light and dark who embodies the concept of death and is tasked to enforce the line between existence and non-existence by ferrying the souls of the recently (and not so recently) deceased toward whatever afterlife they are destined to go. Death's true origins are a mystery; his power is neither linked to the holy or to the demonic, and none have ever seen whatever lies under his great cloak. All those who did are forever unable to tell whatever they saw. Some say he was tasked by a divine creator to watch over the souls of the living, others say that he is a demonic manifestation of the world's destructive traits; yet more claim that he was the angel in the great beyond who drawn the shortest straw when it came to duty assignment. If anyone ever had any inkling of the truth, such knowledge is long lost.

Regardless of the truth, what is known is that Death was, if not good, once neutral or even sympathetic toward mortals. His touch, although cold, was one of mercy and solace, ending the pain of those suffering at the hands of the monsters and demons. However, an unknown event also forgotten in the mist of time caused whatever sympathy he had for the living to vanish. Cynical and bitter, Death has become disillusioned toward life, seeing it as an exercise in futility and a big joke to which he is the punchline, a fate he hates. Having lost interest in whatever purpose, goals, or duties he might have had in the past, Death decided that since he already ruled all mortals in everything but name, he might as well make it official. Thus came the first Purge and the beginning of the current age.

It is unknown if the earliest recorded Purge was the first but regardless of whether it was or not, it is known that Death destroyed most of the world's civilizations. A large portion of every sapient's population pool was severely reduced in massacres of nightmarish proportions, Death using his power to create and unleash an endless torrent of undead upon the living. Many sapient species were outright rendered extinct, and none of their great civilizations survived his wrath.

Death now reigns over the world. His is a brutal, cruel reign; Death unleashes curses, further Purges, and messes with the living in creative and petty ways to alleviate his boredom. There is no community that did not lose something or someone dear to them. Though all mortals resent him, Death has built a great crypt in the middle of what was once the capital of the world's mightiest civilization and challenged all mortals to come to him if they had any grievances with him. As the bones from hundreds of thousands now litter the streets of Death's capital, a testament to entire generations of failed attempts to drive him off, none remain who are willing to try anymore.

Nowadays, mortals take on a passive-aggressive attitude toward Death. He rules the world, everyone knows it, he knows it, and he constantly rubs it in in everyone's faces. This does not mean they have to like it... though frankly, Death doesn't really care that he is universally hated anyway.

Life carries on, well the best it can anyway. Though the world tries to rebuild itself, there is little hope; everybody knows it is only a matter of time before Death launches his next purge, that when he does no one will be able to stop it, and that if Death gets bored he'll jump on any slightest excuse to do it. Unfortunately, Death is always bored, all the time.

Being the primary antagonist of the game, Death cause the game's events by kidnapping Raga's master and then cursing Amberfall, destroying all of the exhibits from Sir Wizard's career and burning away all of the blueprints he had gifted the town's blacksmith with. When the town's adventurers and townspeople assemble and venture forth to try and rescue the wizard, Death unleash his forces and quickly overwhelm them, trapping them through his domain. By the time Raga begin his journey, Death has dispatched his right hand, the Zombie Overlord, to assemble his forces in the Cemetary by Amberfall's border to prepare to raze it, thus making sure that Sir Wizard's legacy and that of Amberfall's is erased forever.

Although Raga does not meet Death personally until the end of the game, he will fight his various creations and followers through his journey. Given Raga's quest does not end in failure, he will encounter Death in his throne room within the crypt. Only by defeating Death can Raga free his master and foil Death's plans.

When the battle begin, Death will be sitting on his throne. An aura that is either blue or red will appear around him and then he will teleport away, starting the battle.
His first pattern is, to the unprepared, the most dangerous one. He will teleport directly in front of whatever direction the player is facing, pause for a second, and then fire a scythe in the player's direction. If the player is moving forward when Death teleports in, the player will be telefragged, resulting in massive damage. Thus, the player should stand still and wait until Death has appeared before moving in order to dodge both Death and the thrown scythe. The player should be careful as each scythe thrown will stay on screen for a significant while and thus, moving back and forth on the same spot will result in being hit by a bouncing scythe. After a certain number of this trick, Death will try something else.
He will teleport around his room, with his aura showing where he will appear though he will never appear hugging any of the walls. Death will then draw a magical circle. The pattern on the magical circle will indicate in what direction his attack will be performed ; a cross means that he will fire two scythe north, east, west, and south. The player should thus dodge the attack by standing diagonally from Death. If the circle indicate a X, the scythes will be thrown diagonally. The player should stand horizontally or vertically from Death and then adjust his location to avoid them as they bounce all over the room. If the circle indicate a pentagram, Death will fire five scythes either to cover all the room or as a spread shot toward the player. The player should keep his distances and be ready to move out of the way.
After a couple of scythe shots, Death will start firing spirals of fireballs all over the room. The color of his aura indicate what type of fireball he will fire. Red ones do massive damage while blue ones will freeze the player upon impact. The room contain two chests and each chest contain a ring, with the color of the chest corresponding to the ring necessary to halve the damage of the red fireballs and to remove the freezing effects of the blue ones. The player should watch Death's fireballs carefully and stay away. Due to the length of the attack and the speed of attack, running around Death is not an effective way to dodge this attack ; the player must squeeze between gaps in each spiral's arm. After unleashing a few spirals, Death's attack pattern will loop.

Death is very difficult and may appear overwhelming at first. In particular, this battle demands that you keep in control at all times and not panic. The first attack phase, for example, is actually very easy to deal with but panicky, reckless movements may result in the battle ending very quickly via Death telefragging the player. Due to his varied pattern, the way to defeat Death vary on the weapon you are carrying. If the player is carrying a long range weapon like the Hunter spear or Arthur's Lance, the player might want to focus on dodging during first and second phase and counter-attack during the third phase. Likewise, a player with a short range weapon or axes will want to concentrate its attacks during the first phase, while Death try to attack at point blank range. In terms of equipment, heavy armor is recommended as Death rely on single, extremely powerful strikes to inflict damage. The ring worn by the player is not important as the player will likely swap rings during the battle using the ones given during the fight to keep up with Death's pattern on the third phase.

The chests in the middle of the room can either be a hindrance or a blessing varying on player preference. They count as obstacles for Death's scythes and as such, impact the way they bounce. Some players may prefer to get them opened as to make the scythes more predictable while others might like the relative safe spot they create. It is up to the player's decision when to open them.